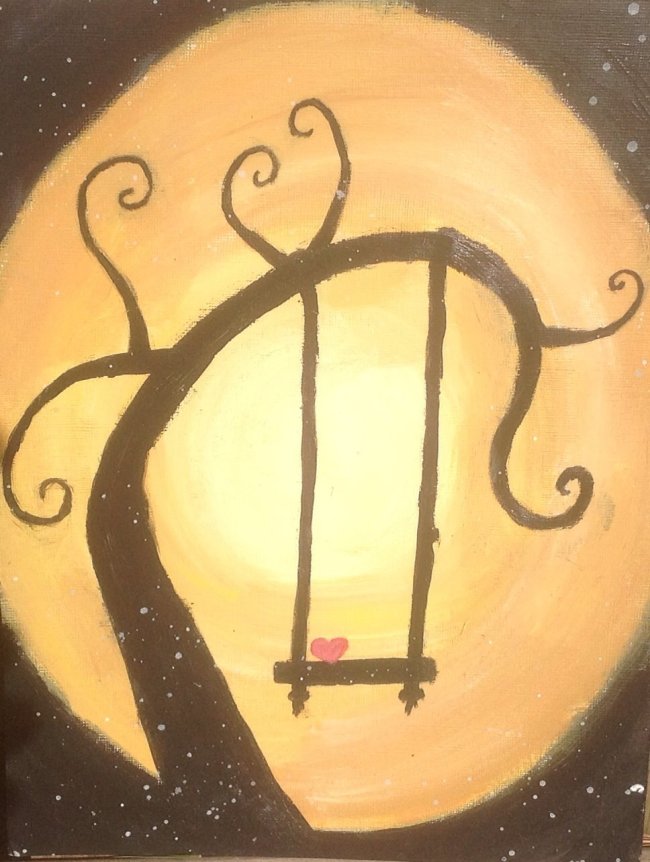 My daughter is seventeen, and she swings.

She swings to save her life.

From the time my daughter was two and could climb by herself onto the seat of the swing in our backyard, she has swung, furiously. From the moment she understood that the secret of swinging is in the arms and not the legs pull the chains and lean back push and lean forward repeat she has swung, frantically.

My daughter swings so much that the hooks that hold the swings eventually pull out of their sockets and new holes need to be drilled. My daughter swings so much that we’ve had to replace the heavy wooden swing-set three times in fifteen years. The second time we replaced it, the large beam that holds the hooks had split in half from so much swinging. When we replaced it with a new swing-set, I saved this beam and the swing that still hangs from it. I hung it across beams in my garage because it won’t fit into the pages of a scrapbook.

We replaced this swing-set on the morning of Christmas Eve while my daughters – I do have two daughters, but only one swings – were watching television and I was baking cookies, their father wrapping presents up in the bedroom. We were all present and accounted for so it must have been one of Santa’s elves! who delivered it. I keep the magic screwdriver the elf left in the snow by mistake in my desk drawer. It won’t fit into the pages of a scrapbook, either.

When she was eight and wanted to go late at night onto the swing, I worried that the bears would eat her, or a passing hobo might kidnap her. But I let her go. I stood in the kitchen window and watched her. I didn’t take my eyes off of her. I stood in wonder at my beautiful daughter in need of a nighttime swing.

The swing-set can be seen by passing motorists on my street, a street well known by the locals as a back way into town, and by people walking their dogs. Many people know my daughter swings. Many have commented oh you live in the house with the girl on the swing and seem as much in awe of her as I am.

Sometimes I feel the need to explain my seventeen year old daughter and her swingshe is anxious depressed angry frustrated brilliant lovely hurt waiting to be in control of her own life. But mostly when people say you live in the house with the girl on the swing I just say yes.

My daughter came to me yesterday and said I know it’s not Mother’s Day yet but I wanted to give this to you now. And she gave me this picture she painted, of her swing under a full harvest moon, and a tiny red heart on the seat of the swing.

I love my daughter’s swing.

Link to the article: http://praguerevue.com/ViewArticle?articleId=5544